Among the more than 1,600 varieties of China's gold and silver coin series, the thickening of the coin can be said to be rare, only a handful of varieties. In the gold and silver commemorative coins issued by countries all over the world, there are very few thick coins. Therefore, thick coins have always been valued by the collectors of coin collection. In particular, the issuance of thicker coins usually has an extremely important historical status in the history of coin issuance, or has a relatively special theme and cultural connotation. Usually the circulation is less than the same variety. Therefore, it is even more highly respected and favored by the collectors of coin collection. 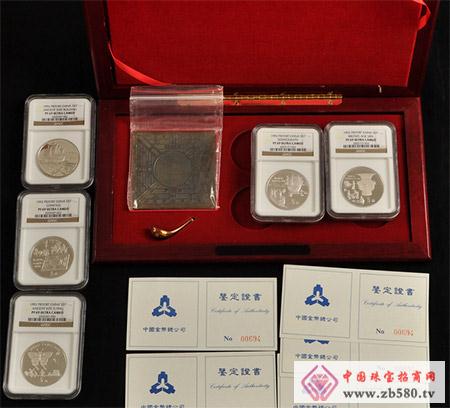 The gold thickening coins in the "children's annual watering" gold and silver coins are very rare. Due to various historical reasons, their deposits are less than 50. The big collector Li Guoying has collected Chinese precious metal coins for 15 years in Germany. He has only seen two, which shows its rareness. The price is very high, and at the coin auction, it has already sold more than 300,000 yuan. And only occasionally can be seen at the auction. It has become a favorite of Chinese and foreign top collectors, rather than the luxury of ordinary collectors. However, one set of silver thick coins was issued in only 2,000 pieces, after nearly 30 years of precipitation and consumption. Market circulation is very rare, and its price is not very expensive. If it can be included in a bag, it is also a rare opportunity.

The second is the 44 grams of silver coins in the "Chinese ancient technology invention discovery" gold and silver commemorative coins (the first group). This set of thick coins is the only set of thickened coins issued in the series 1-5. Like the aforementioned "Children's Year? Watering" gold and silver coins, it issued thicker coins after the issuance of the common currency. Therefore, in a sense, it is a "pure" thickening coin. Second, the circulation of this set of coins is not large. According to the data, it is 2,500 sets. This is a rare species in the silver coin sector. However, the author verified from the "Shenyang Mint Map" that the total casting capacity of the set of coins is actually only 2068 pieces. In this case, is the investment value of the set of coins not higher?

The third is the second round of the 1 ounce Zodiac Memorial Silver Coin. This group of zodiac silver coins weighs 1 ounce, but the size is 32 mm, they can be said to be the only set of thick coins in the zodiac series of gold and silver coins. It is worth mentioning that the group of zodiac silver coins began in the "Dragon" year of 88 years and ended in the "Rabbit" year of 1999. However, their circulation is not the same. There are 20,000, 12,000, 9000, 8,100, 8,000 and 6,000. The largest circulation is the "Long" Zodiac 1 ounce silver coin, with a circulation of 20,000 pieces. The "snake" zodiac with the least circulation of 1 ounce of silver coins, with a circulation of only 6,000 pieces. That is to say, the integration of a full set of charge is only 6,000 sets. At present, the price of this round of silver coins is only 10,000 yuan, not too expensive.

600 d waterproof Oxford Cloth has excellent water repellent performance.When the rain drops on the cloth,  the rain cannot penetrate into the reverse side.Due to the good quality, our cloth is widely used in luggage, sunshade, folding chair, car shed, trailer rainproof cloth, industry, home and other industries because of its good waterproof performance and excellent quality .Now it is popular in market.We now have perfect after sale system and technical support .We are now trying our best to exploit new market share and looking forward to build relationship with you !